Shopping Cart
Your Cart is Empty
Quantity:
Subtotal
Taxes
Shipping
Total
There was an error with PayPalClick here to try again

Thank you for your business!You should be receiving an order confirmation from Paypal shortly.Exit Shopping Cart

Zhangjiajie in northwest China inspired the bewitching landscapes of James Cameron’s science-fiction blockbuster Avatar. Join Min-Zhui Lee as she discovers the UNESCO-listed scenic areas of Wulingyuan, venturing underground through caves, down a magical lake in the mountains and then high up to precipitous rock formations and across the world’s longest and highest glass bridge.

Good news!! Now you can apply for Chinese tourist visa in Okinawa. You can go to New Overseas Chinese Association in Urasoe city. We contacted the staff  there and she confirmed that they do tourist visa for US military SOFA passport holders. Here are some information. 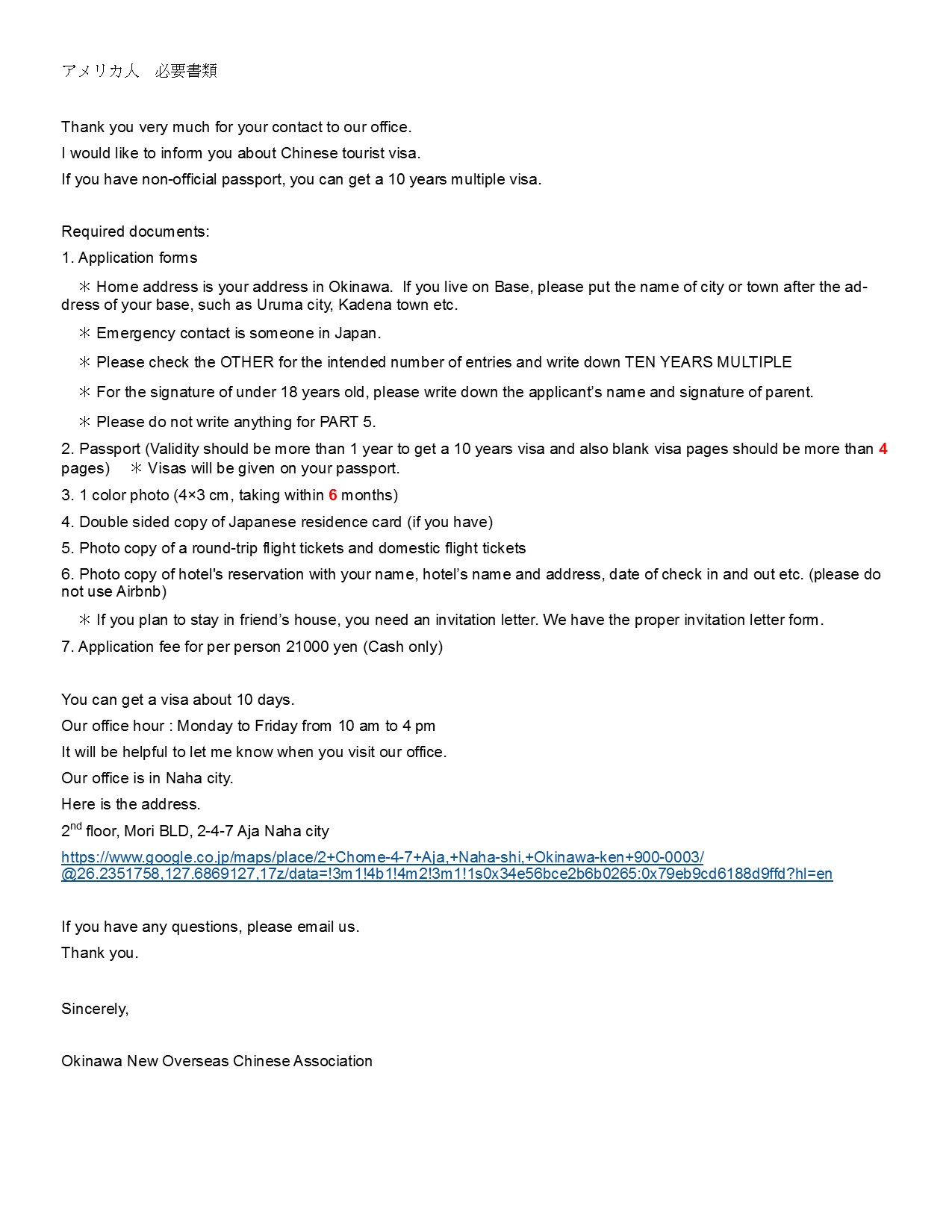 How much do you tip in China?

Generally speaking, you don't need to worry too much about tips when you're in China. Tipping in restaurants, spas, taxis, salons, etc. is not expected and it can be a welcome respite for those of us from countries where it is a real headache calculating how much one should tip.

That said, it's a little different when you go on pre-organized tours. I can't speak to exactly why tipping is expected on tours, but it's come to be the norm. It is customary on tours to tip the guide and driver a certain amount per day. Of course, if you feel very strongly against the tip, you don't have to give a tip. However, if you thought the guide/driver were especially bad, then we recommend that you report any bad behavior back to the tour operator so they know and can take appropriate steps.

If you are traveling in a small group like 8-10members, I suggest approximately US $10 per day per person as tips for your tour guide and driver as gratitude for their service. Gratuities can help improve the service for you. Anyone who has received a tip will recognize that his services have been appreciated. If your guide went above and beyond during your tour, a little more money is always appreciated. I have found it truly is the case that they are doing their best and want to please their clients.

China isn’t as cheap as it used to be, but you can always find a good deal if you look hard enough. Beijing, Shanghai, Hong-Kong and Macau are particularly pricey. However western China is still inexpensive travel destinations.

In very high-end hotels you may leave the bellhops or concierges $10 per item of luggage. But it is not expected.

In Hong Kong the expected tips is $5-10 for every luggage they carry. Hotels sometimes add a 15% service charge, but mainly for large groups.

In China some restaurants refuse tips. However, tipping is becoming more common, but mainly in high-end restaurants where a 10-15% service charge may be added to the bill. Elsewhere it is not expected

In Hong Kong a 10% - 15% charge is commonly added to the bill. It's courtesy to leave your coin change, or round up to the next dollar if paying on your card. If you are unhappy with the service, it's fine to not leave a tip.

In China, the taxi drivers do not expect a tip, nor will they ask for one. They will not accept a tip. In some areas of China, it is still illegal to accept a tip, and thus ingrained in Chinese culture to not accept one.

In Hong Kong taxi drivers will round up to the nearest amount, and usually don't give you back small change.

Hair stylists in China do not expect a tip for a haircut. Nor do barbers. However, western hair salons in China may expect a tip, as they often employ western stylists.

Trip to China- Tour or Independent???

Going on a tour with 30 to 50 people, walking around in a mob following a tour guy with a flag isn’t my idea of a vacation. However, with a smaller group, it’s an entirely different experience than what I had expected. Our trip to China was one of the best and most memorable trips I’ve ever taken. It was an organized group tour. There were only 16 of us on the tour. As we spent every day together, we all became friends even until this day. 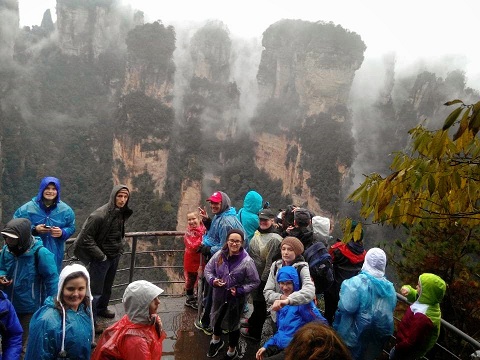 After my trip, I found that there are many benefits to travel with tour companies. They really do suit the purpose of a lot of travelers. In fact, now that I have two kids, I am more inclined to join organized tour for our vacations. When you are new to an area, it often takes the entire day to travel from one destination to another with a family. With a well-organized tour group, it is easier to adjust to a new environment and a brand new culture.

With a knowledgeable tour guide, you will learn many interesting facts and historical stories that only local residents are familiar with. It will greatly reduce the time you have to spend planning and researching on your own. The tour package organizes your transportations, meals, stays, and activities. With the services the tour group provides, travelers could focus on enjoying the trip rather than worrying about the never ending worrisome list.

Tour guides can also offer a safer experience. In south central Asia, almost no locals speak English. This makes ordering food and asking for directions especially difficult. With the assistance of the experienced tour guide, you'll be able to get yourself out of strange situations even when you don’t know the language. Last but not least, some attractions open only exclusively to tour groups during non-business hours. Given all the advantages of traveling in tour groups, I would really recommend anyone to try traveling with a tour group on the next vacation! 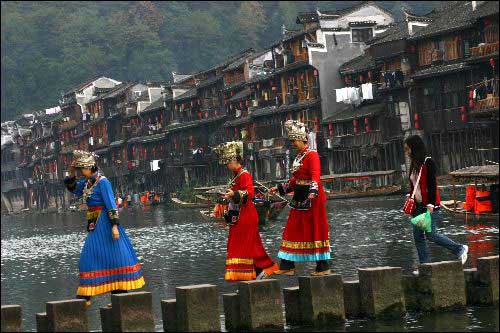 Traveling with kids to Zhangjiajie

Every time when people plan a trip to China, the first thing that comes to their mind is Beijing, the Great Wall or Xian, the Terri Cotta Warriors. To be honest, it is not on my list. I prefer to avoid the popular tourist routes and venture through the mountains, forests and valleys that hide and protect many little-known cultures of China. When my children were 4 and 7, we finally decided that for once we would like a vacation that wasn’t all about sandcastles, zoos and ice-creams and we set off for a week in Zhangjiajie with the kids. 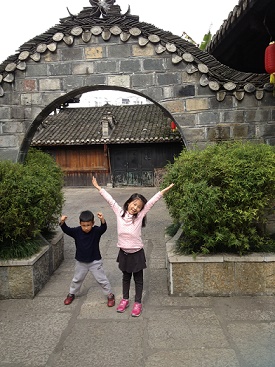 For those who aren't familiar with this place, it is the first area of China declared as a national park by the Chinese government. The scenery is very unique with tall, thin pillars of rock and trees everywhere. James Cameron was so struck by the beauty of this place that he used it as the backdrop for the flying scene in Avatar. 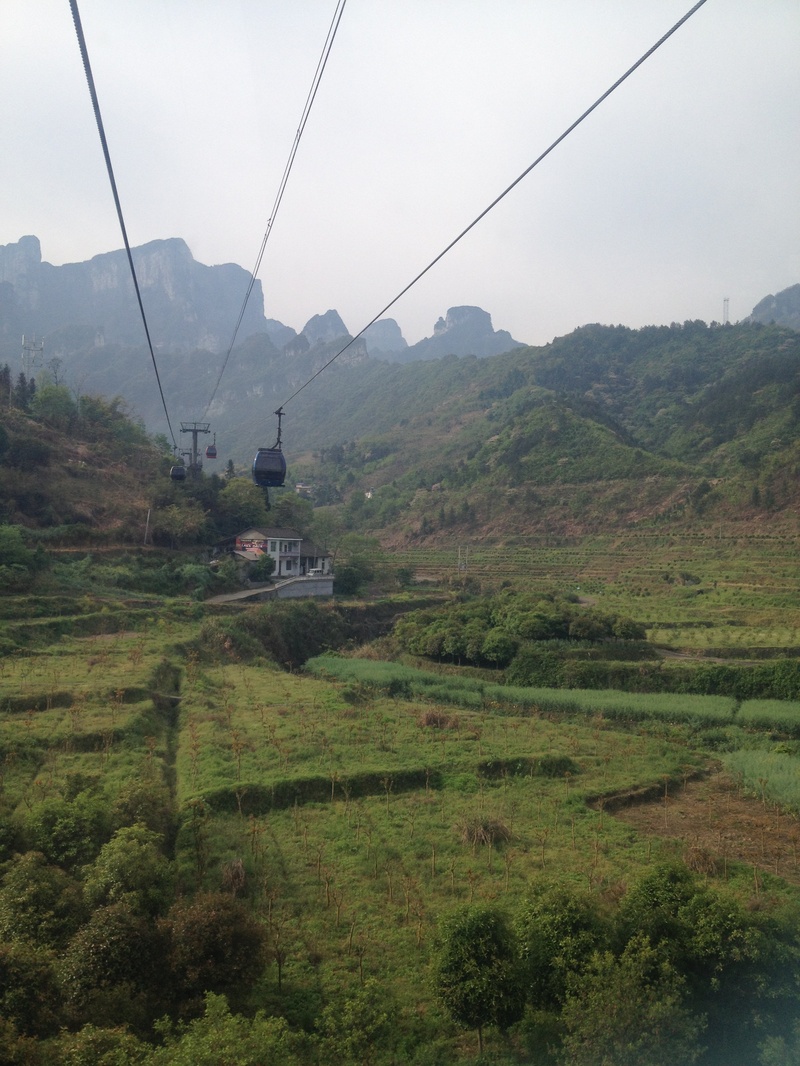 There is a lot of traveling involved from Okinawa to Zhangjiajie. With this in mind, we prepared with plenty of new coloring books, stickers books and of course fully loaded iPads. And we had a blast! We joined a 7 day tour provided by Zhangjiajie Huayi Travel which took care of all the details, transportation, accommodations, most meals and activities so that traveling with 2 kids made a bit easier for the parents. 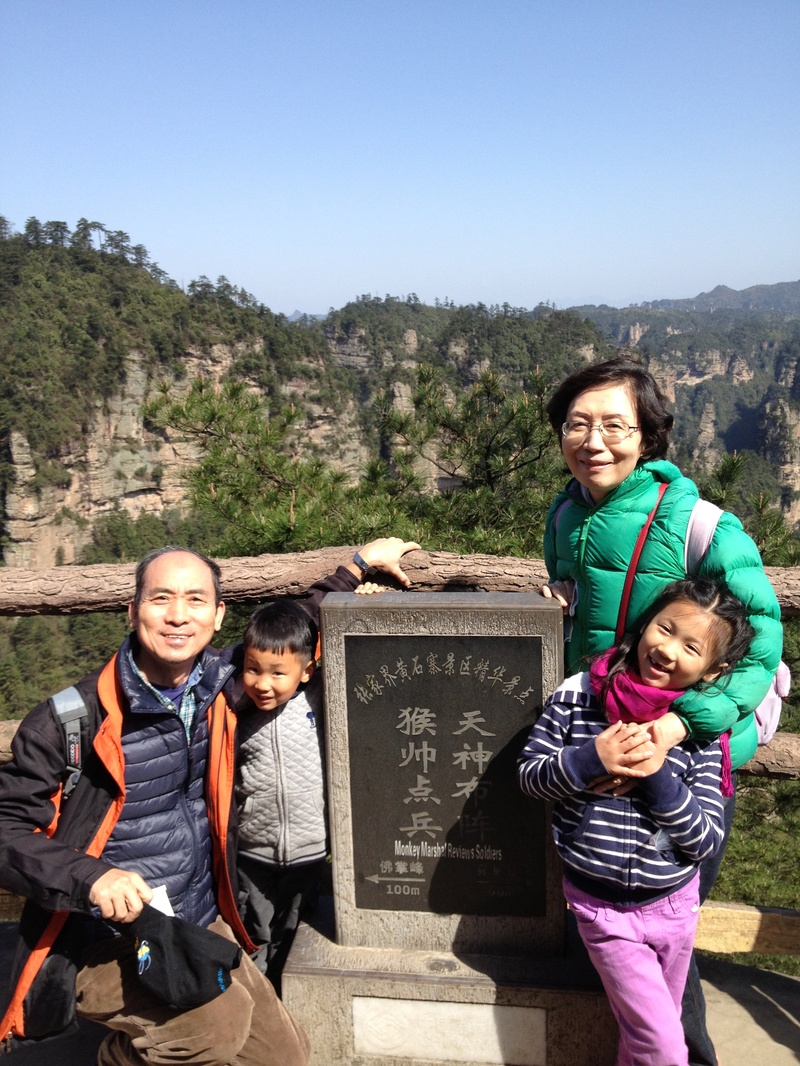 The highlights of the trip for me were the visit to Yellow Dragon Cave, the top of "Avatar" mountain, and the walk through the bottom of the valley floors and looking up at the peaks. We also saw many museums with old relics from this area of China, which is apparently one of the earliest settled locations. We even got to see a preserved house from the Qing dynasty. It was pretty impressive! I think if I asked the children what parts they liked the best, they would probably say the cable car. The children were such troopers and we walked so much over the course of those five days. 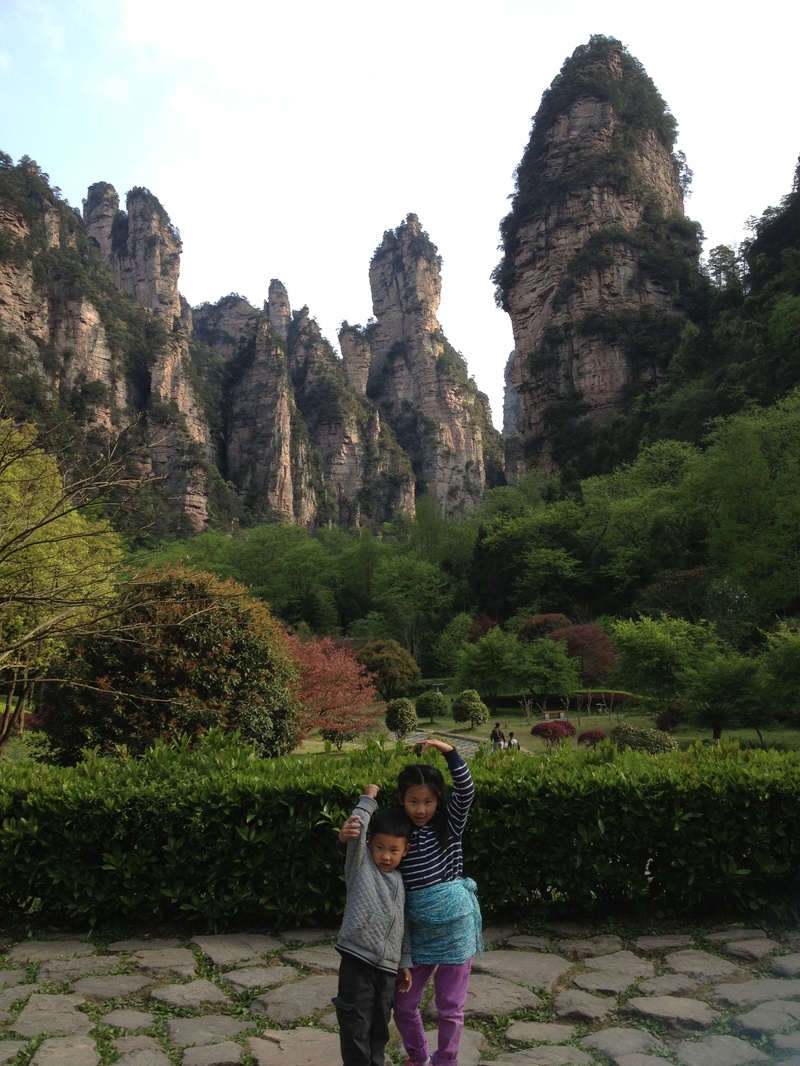 When you travel in China with kids, there are few things I would suggest:

If you are traveling with a group, there are other families with kids. It is fun to go with others that share the same interests, the children also have pals to run around with. I don't worry if my kids are being too noisy, get cranky or start acting up. Your fellow travelers are parents and they know. There were even older kids who would just hang out with my kids and take care of them while they hike.

I always pack antibacterial hand wipes for kids and anything else that will help them keep their hands clean all the time.

3. Prepare for squatting for pit toilets and always have toilet paper

I carry mentholated or peppermint chap stick or air spread to be applied right before going into “smelly” bathrooms. This might make “going” more tolerable.

4. Never drink tap water or eat the food from Street Vendors in China

I always boil the bottled water using a kettle provided by the hotel unless it is familiar brand from US. I never eat the food from street vendors because I don’t think our stomach is familiar with local bacteria such as salmonella. (Bring Probiotic)

China is very much a bartering culture, but you don't really do it in the bigger stores. It has to be done with vendors on the street

Lastly, Crowds are just something the average visitor in China has to get used to. Don’t ever expect to get a picture of something without other people in it. Sometimes, the only way to get from point A to point B is to literally shove people. For Caucasian parents, your kids might attract many Chinese people like paparazzi asking to take pictures with your kids. The reaction will be most intense in areas where international travelers are rare. Be prepared!!

When seeing something as beautiful as Zhangjiajie, it's hard to really describe in a blog just how beautiful it really is. I will let the pictures speak for themselves.

If you’re heading out to China, I hope my post inspired you to bring your kids to check out Zhangjiajie before Beijing. It will be well worth it!

What do you think this look lilke?? 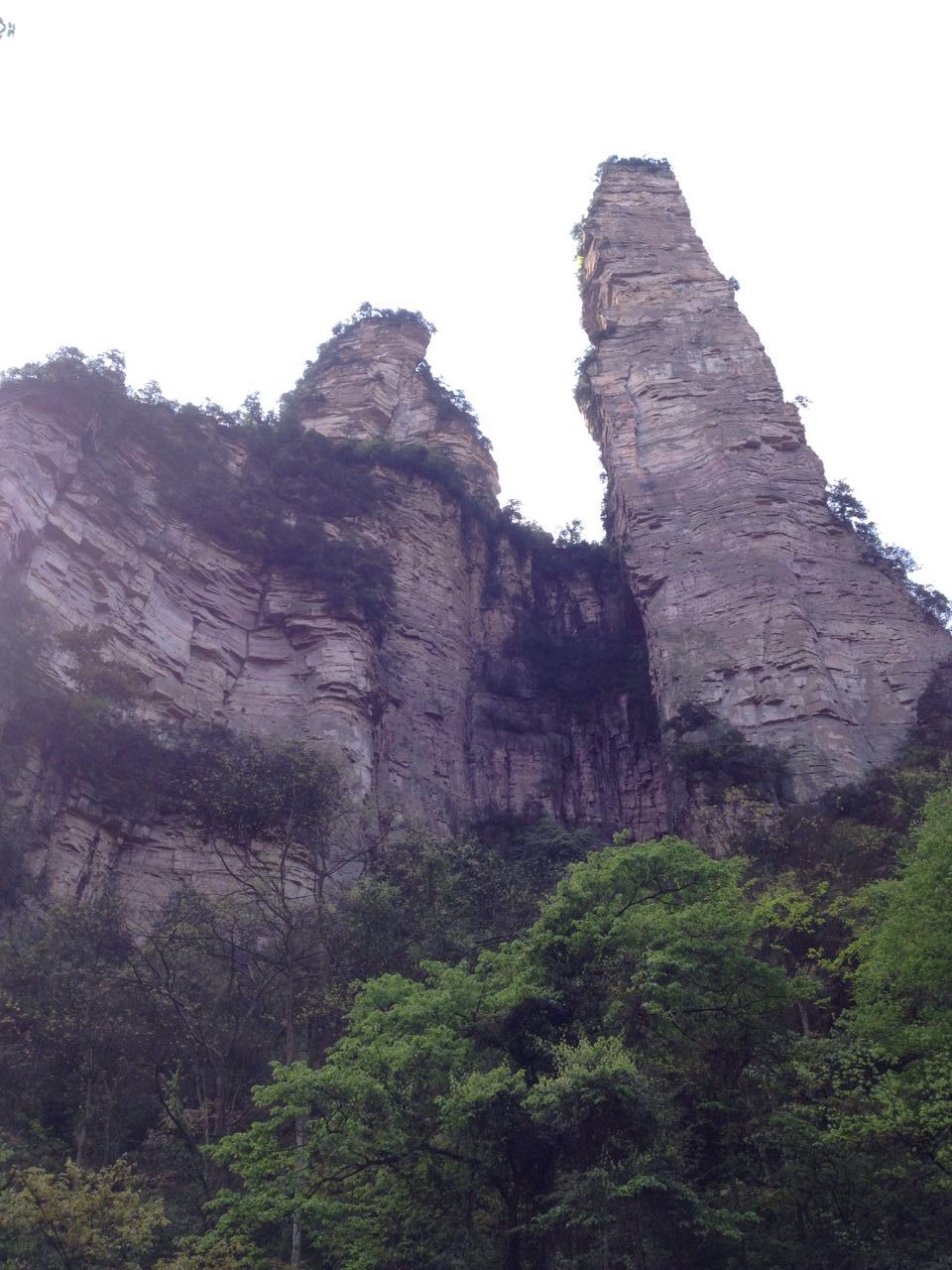